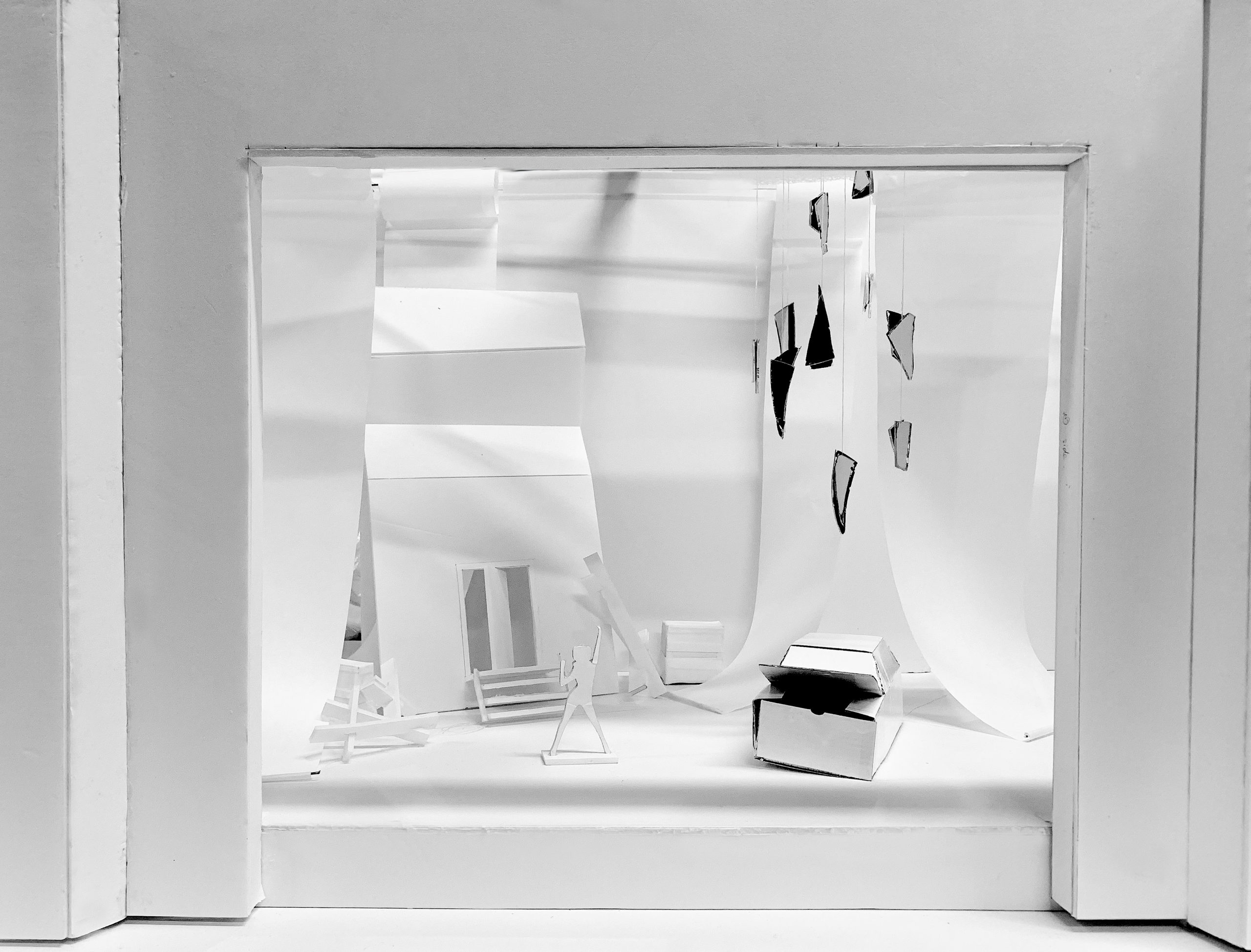 Final Model & Storyboard for “Hedwig and the Angry Inch”

I. Tear Me Down

This scene takes us from Hurt Locker’s scene to the stage that Hedwig makes on her own.

Hedwig enters a bomb-crater-like place via parachutes. She can see a exploded car, messy roadblocks and barriers, broken wartime building facades, shatters, and a clear blue sky. She walks around the debris while singing loud.

Hedwig goes to the stage entrance door and spray paints on both sides. A man and woman “pieces”. Imagery of the historical Berlin wall is depicted while Yitzhak sings. (This is a setup for the song “The Origin of Love”, where Hedwig will spin the door creating the Bird in Cage Illusion). For now the audience should just view the act of grafittiying the Hurt Locker set, as Hedwig making her mark on the stage.

Hedwig marches on the center of her stage. Graffiti appears on the walls besides her, and turn to colorful yet rough walls. Hedwig makes the place her own, because today the Berlin wall is covered in graffiti art.

Now 26 years old Hedwig (Hansel) strikes triumphant pose and realized the opportunity that Luther provides. This song is about power exerted and given up. Hedwig used Luther for Versace blue jeans etc., and Luther indeed bought Hedwig with goods. This is a very upbeat fun song about something more dirty and dark. It’s not really about candy, candy is a metaphor that Hedwig is under the control of power without even noticing the truth. This sweet trap led to her sex change operation, and her life with an angry inch.

Hedwig standing still with a triumphant pose and let her submerged in “candies” (candies projected on smog). Gummy bears slide down a shaking linen in a long line just as falling onto bedsheet. Colorful pigment flushing the other static linen fabric in shapes as candies.

Blue and black inks flow down along the stage right fabrics to the floor and dyes Hedwig blue and black. More colorful explosion messes the other fabric as well as mirror pieces. The mirrors reflect those color strongly into audiences’ eyes.

The fabrics shake and tighten in beat to the song.

Honey continues flowing, the floor gets more and more sticky for Hedwig to get rid of. She gets flooded and trapped.

Hedwig keeps singing when standing in the honey river, spotlight switched between she and Yitzhak (as Luther) when they’re talking to each other. She  tried to get closer to the trap door.

Hedwig licks the honey and takes the ownership of it. She rises up, standing as Venus, and honey starts runs away from the floor.

Hedwig is broken in this quiet song.

Hedwig is standing alone in spotlight in the middle of her stage. People can not see anything except for her.

Red light comes onto the mirror shatters. “Now everyone gets to take a stab.”

Images of her mother, of Luther, of Tommy appeared one by one on the fabrics as they get loose and lighten up. Hedwig walks among those fabrics and when she passes by Tommy’s panel, she spins the door powerfully and extremely bright light goes in and light the whole stage.

When this song finishes, all the fabrics are suddenly tighten for the following song “Exquisite Corpse”. Which is very dramatic, flashy, with strobe light from the rotating door.